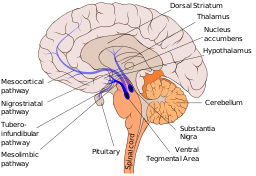 In my last post, I talked about the hijacking of the brain’s reward system and the role it plays in addiction. I need to expand on that, because this is a lot more complicated than it looks. It is fascinating from a Stoic viewpoint: How much of our unconscious processes are truly in our control? I use Markus Heilig’s excellent description in his book, The Thirteenth Step, to inform this blog post. Addiction cuts right to the middle of our selves. Why do we think certain things? What is our motivation and what do we feel as we indulge?

We have observed that certain stimuli reinforces behavior. For a certain (unknown) percentage of people, eating cookies stimulates a desire to eat more cookies. Some people who watch James Bond movies get a hankering for a vodka martini. Experiments on rats have helped scientists articulate the idea that engrained in our brains are natural reward systems, systems that are hypothesized to motivate us in getting those rewards (e.g., food, sex, and pleasure). These reward systems are so strong that we could put ourselves in danger to access those rewards. That’s the essence of addiction: seeking and abusing substances despite the adverse consequences.

Basically, the reward pathway behaves as follows. In the midbrain section, the structure known as the ventral tegmental area contains cells full of dopamine, which send these neurotransmitters to another section of the brain known as the nucleus acumbens. Affecting this pathway somehow stimulates self-reinforcing behaviors. We’ve found through studies on humans (see Nora Volkow) that most of the drugs abused by people increase levels of dopamine in the nucleus acumbens. For example, sex increases dopamine by double, while amphetamine increases them tenfold!

However we know that drugs affect the dopamine pathway differently? What can be more different than cocaine and heroin? Yet they still produce the same addiction behavior. Then we have tolerance, the high gets harder and harder to achieve, so why continue abusing these drugs? But we see those with the highest tolerance are most in need and hardest to treat. One prominent hypothesis is incentive sensitization, where some mechanism strengthens the incentive to get a reward, even if that reward will disappoint us. From here we must differentiate two processes: “wanting” a drug and “liking” a drug. It appears the dopamine pathway and incentive sensitization are involved in “wanting” a drug.

What about “liking”? Enter the opioid receptors. These receptors are also located in the same parts of the brain as the dopamine pathways (although they are in other parts of the nervous system as well, places that regulate pain information and breathing pace). Activate these and you can see the euphoric effects. OK, but why differentiate the two? Because even long after withdrawal and tolerance effects dissipate, we still see high rates of relapse. Sure, they play a large role, but they are not sufficient to explain continued abuse. We believe that structural changes in the brain (neuroadaptation) sensitize addicts to still “want” drugs.

However, there are still many unanswered questions. How does dopamine actually affect drug seeking behavior? Would increasing dopamine levels help? How about decreasing them? What other parts of the brain are affected? How are we even sure that tweaking the brain reward systems will work? Finally, how would we develop treatments knowing this information?

Summary: Addictive substances can hijack the brain’s reward systems, which can divided into “wanting” and “liking” processes. They can also induce changes in the brain, hypothesized as incentive sensitization. We still aren’t sure how to use this information clinically.

Follow Stoic Scientist on WordPress.com
The World Of Caradesance

I LEAVE YOUR ROAD TO WALK ON MY GRASS.

Poetry and Short Prose by Gabriela Marie Milton 2019 Author of the Year at Spillwords Press and Author of Passions: Love Poems and Other Writings

A Collection of Unmitigated Pedantry

A look at the history of battle in popular culture

Tales from the mouth of a wolf

Pain goes in, love comes out.

Story reminds us that fiction and reality do not exist; or that they are the same thing

One Chance to See the World
Cristian Mihai

launches a project every month

I dont have the answers, just a lot of questions.

The Peridot of August

Art doesn't have to be worthy

to be worth sharing

Musings and books from a grunty overthinker