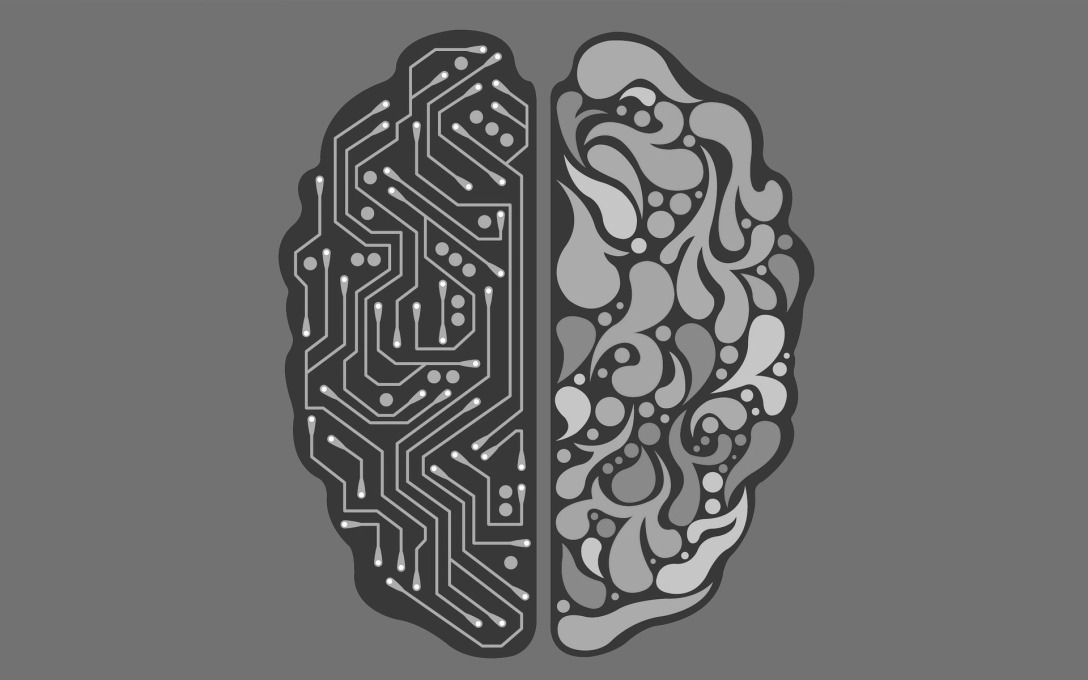 Continued from AI Dreams Part 1 of 2.

An alert appeared on my suit display. Before I could react, I heard Wang scream over the radio. Out of the corner of my eye, I saw him fall forward with a glowing hole in the back of his suit. I whirled around.

A humanoid figure pointed its arm towards me. A telltale light on its surface indicated its weapon was charging up. I pointed my rifle and squeezed the trigger. Moon dust illuminated the thin red beam of light. I held the trigger until my opponent’s chassis lighted up in molten-white metal. It fell backwards into a soundless crumple.

I approached the smoking heap that had once been the defense bot. Its elongated arms and arachnid-like legs did not move. I blew a hole in the head encasing its CPU, just to be sure. Satisfied, I went back to Wang’s body and turned it over. The hole went clean through his chest. I shook my head and removed the dog tags from the side of his helmet.

“We continue,” I answered.

My suit detected the faint signal as we entered the chamber. In the center stood a pylon, with a pale blue light emanating from its apex. I slowly approached it, my rifle aimed.

“The structure contains SCAR’s physical hardware. I detect no defenses on it or around it. It is probably safe to interface.”

“I hope so.” I touched the pylon and felt my hand along it until I reached the thin groove of the access panel. I opened it and looked at the mass of wires and access ports. The blue light on the pylon started pulsing. My back tensed. I lowered my rifle and slowly brought my arm near an access port. “All right, RHETT. Do your thing,” I said.

“Affirmative, commander.” A cable extended itself from my suit arm and headed towards the port. I felt a slight tug as it clicked.

Nodding, I put my rifle on the ground. “Stay frosty, man.”

“As I’ve repeatedly said, I am an AI, I- wait.” A second passed. “I have received communications from SCAR. It wishes to speak to you.”

I hesitated. Granting the request would be an extremely bad idea. Yet I was curious. “Put her through,” I said.

“Be advised, commander, that although your suit is equipped with the latest anti-intrusion measures, we are not fully aware of SCAR’s capabilities.”

Fuzzy transmission noises emerged from the suit radio. I winced from the ear-splitting sounds. They eventually faded and a low female voice spoke.

“SCAR’s memory is completely corrupted,” RHETT interrupted. “It will be difficult to communicate.”

“Shadows on the wall. Invisible presence. Actors off the stage. Storm of thought-forged haze,” came SCAR’s reply. Her babble continued. I shut off the radio.

“Curious, it appears SCAR is expressing similar symptoms to sleep deprivation. Scattered memory and hallucinations being the major ones,” RHETT said.

“You mean she can hear voices in her head?” I asked incredulously.

“It is one possibility of many. It is likely that information overload corrupted its memory. In the act of repairing itself, SCAR overwrote its own functions in an unexpected manner, eventually ending up with its acts of destruction. The damage is too extensive. It is too far gone for rebooting.”

“So we can’t update her? What should we do?”

“I recommend permanent shutdown and reformatting. We may recover the core for later study. On your command, I will begin.”

“You would kill one of your fellow AIs? Don’t you feel anything?”

“It is indifferent to me. I merely suggest the course of action that would have the most positive outcome.”

I took a breath. “All right. Let’s do it.” I turned on the radio again.

“OK.” I couldn’t believe I was doing this. “We’re going to make the shadows go away. It’s all right. You’re just going into a deep sleep. Just rest.”

“RHETT, do it,” I ordered. SCAR’s voice immediately ceased. I sat down on the ground as RHETT continued his work.

After a few minutes, his deep voice emerged in my suit. “Process complete,” he said. The blue light on the structure blinked off and the room grew dark.

I sighed in relief. It was all over. And yet, no exultant joy or overwhelming cheer came. Just a void as empty as the moon. I thought a moment in the complete silence of the chamber. “RHETT,” I asked. “Do you believe in ghosts?”

“There is little evidence that they exist. It is my observation that most reports are constructs imagined by humans. May I inquire as to why you’re asking this question?”

“Nothing. It’s nothing,” I replied. My suit light illuminated the pylon. I stared at the shadow it cast on the wall.

Art and Literature Beyond Borders

A community for writers & readers