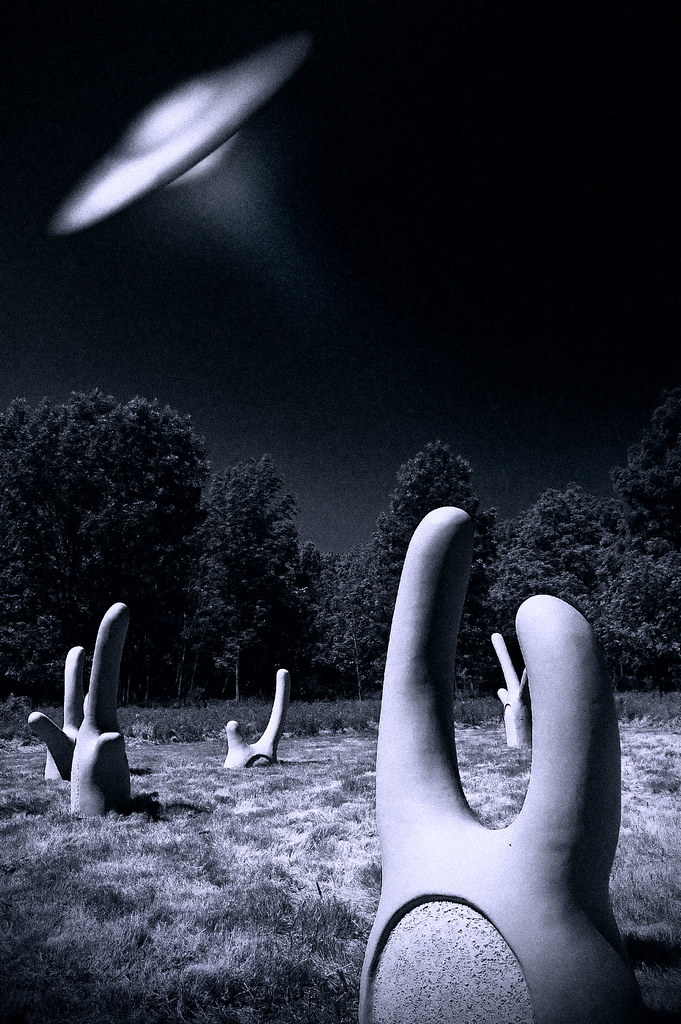 They started by vaporizing the nearby mountain.

Really though, we found out later that they were aiming at the town but didn’t account a slight discrepancy in the relative trajectory of their diplomatic ship and Earth’s rotation. We also found out that firing the death beam depleted their power supply for 24 hours, so that’s why we weren’t obliterated with a second shot.

Since it was clear they were trying to kill us, there was a great deal of consternation at the town hall meeting in the school’s gymnasium later that day. Survivors from all over the county packed the small gym: people with oozing sores from being too close to the heat, those who had been blinded by staring directly at the descending light, and the retirees.

God, I hate the retirees.

“What’ll happen to my Medicare?” shouted a woman in an oversized straw hat and gym sweats as the mayor ascended the steps to the impromptu podium.

“We need to let these illegal invaders know that they’re not welcome here!” yelled an old man in a blue wolf t-shirt and suspenders.

“If only those Millenials had voted for space weaponry rather than loan forgiveness,” muttered a guy next to me. He wore camouflage clothes.

The mayor tried his best to calm the crowd down, but we could see that he was not up to the task. He waved his arms, looking like the balloon guy next to car dealerships. He tried hitting the mic, but we would have none of it. Just as his face caved in to despair, the town sheriff stepped up.

He shot his pistol into the ceiling. Bits of wood fell down to the podium. That quieted the crowd.

The mayor exhaled a sharp breath. His heart rate must have been in the 200s. With a glare at the sheriff, he walked to the mic.

“Citizens!” he bellowed. “We face an unprecedented emergency. I urge you all to remain calm. You need not fear! The government is currently preparing a response to these aliens…” His voice trailed off as a circle of shadow appeared next to him.

All eyes turned towards this strange void. It swirled in a clockwise pattern and emitted a high-intensity screech. We covered our ears as the sound grew louder. After five seconds of torture, the sound stopped. The circle flashed a purple light and expanded out. In its depths, a humanoid figure appeared. The figure stepped forward onto the stage. The circle blinked out of existence. Blurry ripples obscured the figure at first, but began to sharpen until we finally saw our visitor.

We all gaped in wonder at this being. It was definitely not human. A grey-brown skinned oblong head with a single black eye stared at us. The head was attached to a thin torso covered by some dark rubbery substance. It had no arms. Three legs extended from the torso and supported the alien as a tripod. It let out a metallic-sounding chirp, one that reverberated in our heads. It was speaking.

*Greetings, citizens of Earth! We apologize for our confugaboob earlier. We hope you are not too offended. We are the ——–xxxhzt (*Unfortunately, their name is too long and complicated for me to write out) and we come with great news! We are here to be friends. We were hoping to show a gesture of friendship by vaporizing a large portion of your population, but unfortunately, our instruments had an error–

“Hold on a moment!” said the man in the camo suit. “You wanted to show us friendship by blowing us up?”

The alien cocked its head. “Yes. Is that not how human communities greet each other for the first time?”

Its eye opened wide. “Oh my. I seem to have offended you. Let me make amends! I will atone for my mistake by extirpating the human beside me.”

It turned his head towards the mayor. The mayor began visibly shaking. Dark water stains appeared on his pants. “Wait…” he croaked out.

Before we could respond, the mayor clutched his chest and let out a primordial scream. His legs buckled under him and he fell towards the ground. His body writhed in pain and blood vessels bulged on his face. Then he exploded. Gore and viscera covered the alien and the shocked crowd.

The sheriff pointed his pistol at the alien and prepared to fire. It was to no avail. He exploded in the same way as the mayor. All that was left of him was his badge.

Pandemonium erupted. People scrambled to escape the gym. Those too slow were crushed by the panicked mob. Shouts and screams filled the air. The alien stood there, blinking with its one monocolor eye. Another chirp entered our heads.

“Ooh! All this movement and noise from your mouths must be singing and dancing. I can tell from your reactions that you are delighted by my show of friendship! I will go back to the ship and begin negotiations with your leaders immediately.“

The black void appeared again and enveloped the creature. It disappeared. We all stopped and gaped at its former location in confusion. I wiped a chunk of flesh off my shirt.

“What about my Medicare?” yelled the old woman in the straw hat.

Art and Literature Beyond Borders

Understanding ourselves and the world we live in.